I have been managing woodlots in central Vermont since 1987, and in that time, two major ice storms have hit my area. Those two storms damaged thousands of acres across the region, and many landowners each time chose to salvage timber. Since 1987, I have managed salvage operations on 6,000 acres of sugar maple and northern hardwood stands in Windsor County, and my logging contractors have harvested over two million board feet of ice-damaged sugar maple. The cuts followed the guidelines set by the Vermont Forestry Division for ice-damaged trees. In most cases, about 50 percent of the trees in a given stand had to be harvested.

I happened to be overseeing a sugar maple sale in January 1998 when the big ice storm hit. Interestingly enough, this same stand had been hit by the previous ice storm 10 years earlier. The landowner wanted to salvage timber, and because these were trees that had been damaged by the earlier storm, I thought it would be interesting to dissect some of the logs.

I called Neil Lamson of the U.S. Forest Service. He and his colleagues bought and sawed some of these trees for educational purposes. What they observed (and what the accompanying photos show) turns out to be very common in ice-damaged sugar maples in central Vermont. 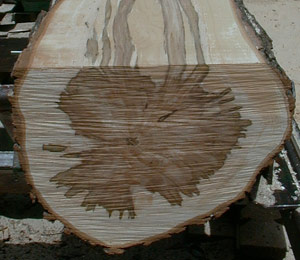 Although trees can be remarkably effective at compartmentalizing decay, stains caused by wounding events can eventually bleed through the whole stem.

Once a tree has been wounded, it’s common for a dark stain to discolor the core of the tree. This stain is not true heartwood, which results in a darkening of the wood from natural aging processes within the tree; rather, the discoloration is a reaction to the wound and the infection that follows. The stain is typically black or reddish brown in color and it makes maple lumber less valuable. According to Walter Shortle at the Forest Service’s Northern Research Station, the rate of stain spread, which travels both upward and downward in the tree, is likely to be no more than 6 to 10 inches per year. But a storm-damaged tree is a weakened tree, and any pre-existing infections near the butt log could spread, as the tree puts more energy into rebuilding its crown and less into compartmentalizing its wounds. Many of the storm damaged trees we dissected showed staining in the top section of the valuable butt log. Since sugar maple log buyers pay the most for logs that have one-third or less stained wood showing on the cut ends of the sawlogs, it seems clear that overall log value has definitely been compromised by the ice storms. 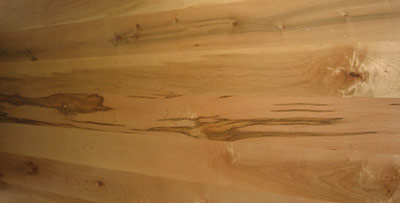 I have revisited all of these stands over the past five years, and I’ve learned quite a bit from looking at the remaining trees. Most of the sugar maple trees still standing after the salvage operations had some ice damage, including lots of broken limbs. When a branch gets ripped off a tree, it is not a clean break. Wood fibers are pulled from the main trunk. The wound on a sugar maple will bleed out sweet sap in the spring, and some of that sap just sits in the wound. This sugar naturally attracts insects, then woodpeckers looking for a meal. About six years after the 1998 ice storm, I started noticing significant woodpecker damage around wound sites on the main stems of trees. After 10 years, I am now witnessing a number of pole-sized to log-sized sugar maples breaking off right where the woodpeckers have been feeding at ice-storm wound sites on the main trunk.

On the bright side, the storm site now features astonishing sugar maple and ash regeneration that is today between 8 and 16 feet tall. This is in an area where deer and moose are abundant, and in the past they’ve eaten all the regeneration. The thousands of fallen branches that littered the forest floor after the ice storm protected the new seedlings from browsing ungulates, and because large tracts of land were all regenerating at the same time, animal damage was diluted. The regeneration was also enabled by the fact that the remaining trees had a good seed year following the storm, and ample sunlight was able to reach the forest floor.

All of this food and cover has made the forest more hospitable not only to woodpeckers but also to grouse and snowshoe hare and the animals that prey on them, so the landowners have experienced increased wildlife sighting in the past 10 years. 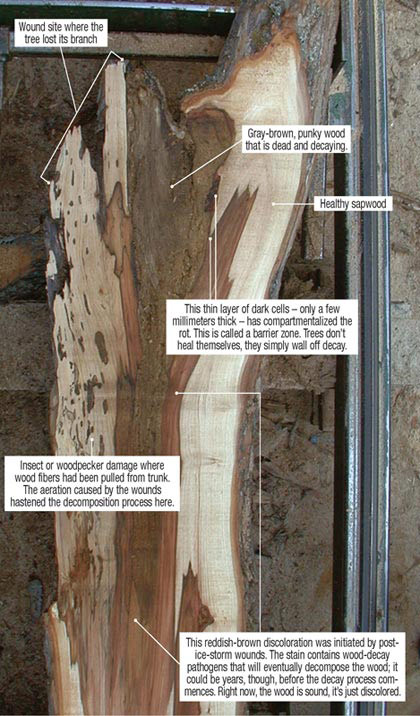